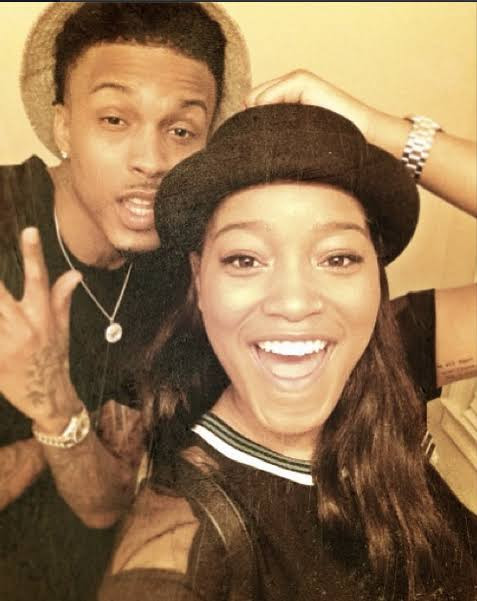 August Alsina went off on Keke Palmer following her reply to a fan who wanted to know if they dated and, from his statement, it appears he’s upset about subs Keke posted seemingly siding with Will and Jada Pinkett-Smith.

Shortly after Jada Pinkett-Smith and Will Smith’s revelation on the Red Table Talk, a fan shared a throwback photo of Keke Palmer riding in a car with August, which Keke had posted and eventually deleted on Instagram in 2015.

Keke replied that it was indeed her in the photo but stated that she and August never dated.
Keke wrote: “Yes girl.

August was never my man lol. That’s why you’re still reaching to this day to figure out nothing.”

And August slammed Keke by sharing her post and writing: “U absolutely right.I was NEVER ur man. You could possibly never shortie. It seems u mad u got curved, but ur “friends” r the reason 4 that.Dey showed me an endless thread of txt/pics of me dat u sent, wrry’d abt who i date &BEGGED me 2 not further disturb ur mental instability.”

He continued: “Imagine not knowing how to mind the business that pay you. I catch all the subliminals. (Not just about today) & you can call me whatever you like, Mess is constantly inserting yourself in topics you have nun to do w/. Go play w/ ya MAMMY! Not me!”
By subliminals, it appears August was referring to posts Keke shared earlier in the day that seemed to be indirectly criticizing him for exposing his relationship with Jada to the public.

Keke had written earlier on Friday, July 10, 2020, “The theme is boundaries. Everybody doesn’t need to know your business, that’s not fake it’s honoring one’s privacy.”

Still dragging Keke, August tweeted again: “If you have something to say, say it w/ ya CHEST kids. It’s always very perplexing cause I real deal be showing people genuine love. Whole time that envy eating ya lil heart. Anyway, NEXT!!”

Followers were surprised and amused by August’s outbursts and they told him he was taking out his anger about Jada’s interview on Keke.

A Twitter user tweeted at August: “August unloading the 69 clip on any female who tries him right now.”

And August replied : “Nah, I’m literally not. I actually fucked w/ KeKe. So to see her covertly speaking subliminal shade around my name over the past week Is deeply perplex. I don’t and never have had a problem w/ the girl. It’s always been Virgo love! So to see that is a mind fuck to me.”

Keke has always insisted she never dated August but this is the first time he’s lashing out about it.

She told HelloBeautiful at the 2015 Essence Fest: “Everybody always thinks I’m dating August just because of the photo we took together on my Instagram page, but no I am not dating August Alsina, we’re just friends.”

”Love of my life” – Adekunle Gold gushes over Simi’s first photo since she had their first child, Adejare