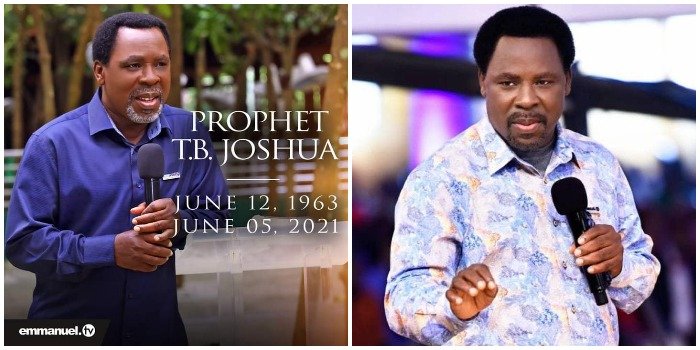 It has now been established that Temitope Balogun Joshua (T.B Joshua) died of stroke- although an official statement to that effect is yet to be communicated by his family and the church.

The popular prophet and televangelist was reportedly flown by air ambulance to Turkey where he finally died after battling the illness for two months ago.

According to trustworthy accounts, Temitope Joshua, better known as Prophet TB Joshua, the Founder of the Synagogue Church of All Nations, died on his way to the hospital.

“Yesterday evening, he led a service. He’d been ill for the past two days. After the evening performance, he decided to go to the hospital. On his way to the hospital, he passed away,” it was revealed by a source.

Recall the death of TB Joshua was officially confirmed by the Facebook page of his church. See the full post below;

“Surely the Sovereign LORD does nothing without revealing his plan to his servants the prophets.” – Amos 3:7 On Saturday 5th June 2021, Prophet TB Joshua spoke during the Emmanuel TV Partners Meeting: “Time for everything – time to come here for prayer and time to return home after the service.”

God has taken His servant Prophet TB Joshua home – as it should be by divine will. His last moments on earth were spent in the service of God. This is what he was born for, lived for and died for.

As Prophet TB Joshua says, “The greatest way to use life is to spend it on something that will outlive it”.

Prophet TB Joshua leaves a legacy of service and sacrifice to God’s Kingdom that is living for generations yet unborn.

The Synagogue, Church Of All Nations and Emmanuel TV Family appreciate your love, prayers and concern at this time and request a time of privacy for the family.

Nigerians, on Sunday morning, woke up to the sad news about the death of the preacher, who many described as a giver and keen about helping people.

Describing today as black Sunday, Mercy Johnson referred to how Prophet T.B Joshua was kind and gave to those in need.

mercyjohnson wrote: Mostly it is loss that teaches us about the worth of things…i know the feeling of grief and it feels like Fear….Black Sunday, RIP to the kind prophet /a man who gave to those in need. Prophet T.B Joshua.

Actress Ruth Kadiri also in a post on Instagram, recalled how the clergy impacted many lives and was a support structure and source of hope to many people.

She also prayed for the family of T.B Joshua for God to grant them the heart to bear the loss and give answers to those who have questions regarding his death.

ruthkadiri wrote: Sad, but true, prophet TB Joshua is gone. You impacted so many lives, you were a support structure and a source of hope for many. I pray God gives your family, loved ones, members, the heart to bear the loss. And also give answers to those who have questions. Rest well sir.

Similarly, actress Wunmi Toriola in her message, said although she is not close to the prophet ministry; however, she has learnt the relentless act of giving from him as the prophet gave his resources and love, which is the true essence of religion.

wumitoriola wrote: I am not close to your ministry neither I’m i to you,but one thing i learnt from you from afar is your relentless ACT of Giving,you gave with your resources,you gave Love which is the essence of True religion..
Of a truth ,we need to show love to one another while we are still living because death is no respecter of age,status,or power… You will be greatly missed.Rest on man of God

There will be no elections in 2023 – Sunday Igboho blows hot