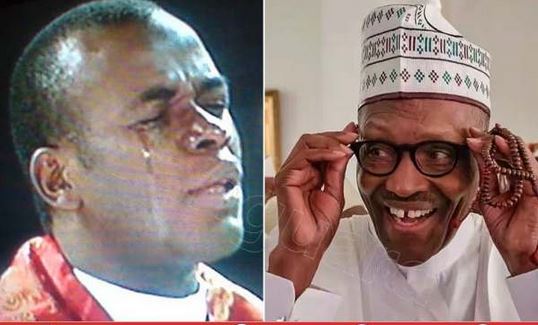 Contract As Compensation: Nigerians React To The Face-Off Between Presidency And Father Mbaka

Fr Mbaka had earlier in the week, called on Buhari to resign or face impeachment as insecurity concerns worsen across Nigeria.

Quite a large number of reactions have begun to flood in as Presidency through Senior Assistant to the President on Media and Publicity, Garba Shehu, revealed to trail claims by the Presidency that outspoken clergyman, Reverend Father Ejike Mbaka was angry because he didn’t get contracts from Muhammadu Buhari as compensation for his support.

It will be recalled that Fr Mbaka had earlier in the week, called on Buhari to resign or face impeachment as insecurity concerns worsen across Nigeria.

But in switch reaction, The APC through its deputy spokesperson, Nabena had threatened to expose Father Mbaka to the Vatican.

The presidency, however, said Father Mbaka had sought a contract from the presidency which he didn’t get.

But Nigerians on social media have defended the clergyman saying it is not wrong to ask for a contract provided he can deliver.

Some are of the opinion that the revelation by the presidency is the height of pettiness, see reactions below