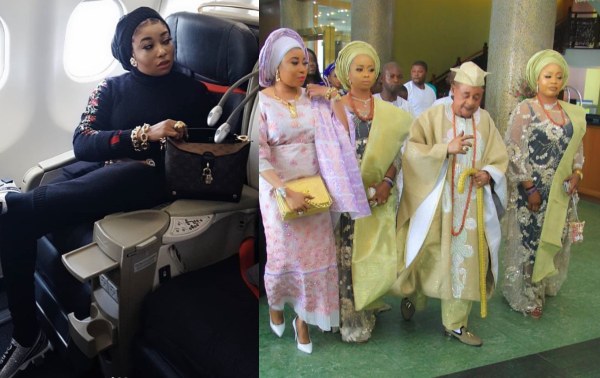 Controversial blogger identified as Gistlover has announced that popular actress and business tycoon, Lizzy Anjorin is allegedly set to tie the knot with a man whose identity is yet to be unveiled.

According to Gistlover, Liz Anjorin’s husband to be is well to do and has many houses, although he isn’t a social media person. Gistlover mentioned that the wedding is set to hold on two days, Thursday and Saturday respectively but the dates are unknown yet.

Recall that few months ago, there were speculations that Lizzy Anjorin is the ‘other woman’ of the Alaafin becuase of the closeness to the Oba Lamidi. The speculations resulted from her Instagram page last year where she shared a new photo and captioned it with her new name and title, ‘Lizzy Anjorin Adeyemi Alaafin of Oyo’, however, it was found that she was bestowed with the title and not married to him.

Although the light-skinned actress is yet t confirm this news, but Congratulations are in order for outspoken, blunt and very controversial Alhaja as she is fondly called.

See how Nigerians are reacting to this news;

layominii wrote “Mama so its you. Congratulations Alhaja”

comfortzone77 wrote “GLB but you said the person is not Yoruba ni?Congratulations to Alhaja saworoide”

kenzy_weightloss wrote “Who is her hubby? Leave my Alhaja lizzy o Abeg”

adesubomilawal wrote “Congratulations am so happy for her”