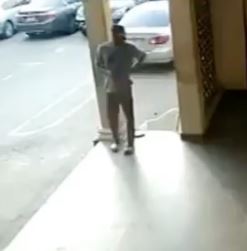 A dismissed police corporal has been caught on CCTV camera stealing a mobile phone.

Police officer caught stealing phone
A dismissed police corporal has landed in trouble after a CCTV camera showed him stealing a phone.
The phone was being charged around the Police IRT Commander’s office.
The man has been identified as 37-year-old Daniel Aaron from Benue state. Upon being interrogated, he also revealed that his wife left him after he lost his job.
He further said that he was dismissed from the Nigerian Police Force after being involved in a case of accidental discharge in 2014.
When asked about the phone he stole, he said he sold it for N37,000 to one Abdul around Mararaba. He added that he sent part of the money to his family.
Watch the video here: