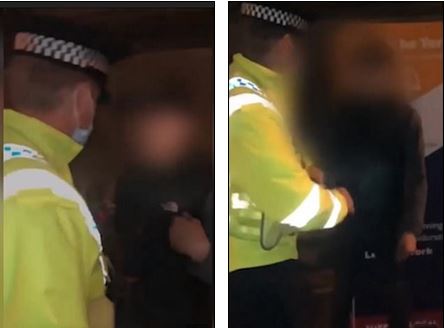 The shocking confrontation was filmed in York city centre and shows the teenager shouting at police officers as he is arrested.

In what will come across as a rather startling development, a young boy has been seen giving a police officer a headbutt.

A footage has emerged showing the 16-year-old boy appearing to headbutt a police officer after warning him to stay two metres away ‘because he might have coronavirus’.

The shocking confrontation was filmed in York city centre and shows the teenager shouting at police officers as he is arrested.

He then seemingly headbutts the officer, who pushes him down to the ground to arrest him.

The officers are surrounded by a crowd of onlookers as they make the arrest.

It is unclear why the officers detained the 16-year-old, though local reports claim he was thought to have had a weapon.

No weapon was mentioned in a police statement after the confrontation.

Following questioning in custody, the boy was released under investigation while enquiries continue.

Another 16-year-old boy was arrested for assaulting an emergency worker after he allegedly tried to intervene in the first arrest. He has been released under investigation.

The police officers approached the group of teenage boys on October 2 because they thought they were being drunk and disorderly.

The footage shows the 16-year-old asking the police officer, who is wearing a mask, to stop coming close to him.

He says: ‘Trying to threaten me and that. Step back. Two metres. I might have coronavirus and that, do you know what I mean. Get away.’

He continues to tell the officers to stay two metres away, adding ‘it’s the law’ as the police officer slowly walks towards him.

He then reaches out to handcuff the boy.

Others crowd the officer, saying ‘he ain’t done anything wrong’ as the young suspect continues to back away from the police officer, trying to pull his arms away.

A second police officer then comes into shot to help restrain the boy who says: ‘You think you’re f***ing big do you?’

The officers corner the boy against the wall as others shout: ‘He’s a kid, he’s a f***ing kid.’

A third officer comes over to help but the young boy continues: ‘Look at you, I’ll f***ing nut you.’

He then appears to headbutt the officer, knocking his hat off.

The police officer reacts shoving the boy to the ground.

A spokesperson for the North Yorkshire Police said: ‘A 16-year-old boy allegedly would not co-operate with the police.

‘It is alleged he head-butted an officer in the face while being placed in handcuffs.

‘The officer and his colleagues had to use proportionate and legitimate force to detain the suspect.’

Drama as lady storms wedding with her children, claims she is already married to the groom with kids (Video)