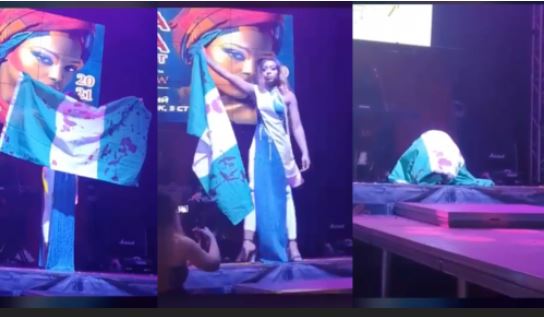 Last Tuesday, a video had gone viral showing Udeh holding up the red-stained Nigerian flag while appearing on stage at the pageant in Moscow as Nigeria’s representative.

Chiamaka Udeh, the beautiful model who displayed a blood-stained Nigerian flag while walking the Miss Africa Russian runway, said she has been receiving threats and insults from different quarters since the video went viral.

Last Tuesday, a video had gone viral showing Udeh holding up the red-stained Nigerian flag while appearing on stage at the pageant in Moscow as Nigeria’s representative.

This action had attracted the outrage of Nigerians in some quarters while some applauded her bravery.

A lawyer, Susan Henshaw, was one of those who disapproved of Udeh’s act of protest, alleging that she wanted to cheat her way through the competition by causing sentiments and playing on the emotions of the judges.

However, in a chat with BBC Igbo, the Lagos-born model from Anambra gave reasons for her action.

She noted that the act was never intended to tarnish the image of her country.

She said, “What I did was actually from my heart. I did it myself; no one told me to. It was a competition, a platform that was given to me. I used that platform to create an awareness of what is happening in Nigeria.

“I did it due to what happened on October 20 [2020]. I also did it because of the recent happenings now in Nigeria. It was basically to tell the world that we’ve not forgotten our fallen heroes, the Lekki protesters who died.

“I did it to also portray recent happenings because there are still killings, insecurity, rape, and all of those things. The flag signifies everything. That category was the ‘Tradition Cultural or National Costume’.

“I felt that I should dress as a nationalist to portray what is happening. I never thought it was going to go viral at all. I don’t know who shared it with bloggers. Right now that it has gone viral, I have received a lot of threats.

“I have received a lot of insults but it’s okay. People who got the message got it. For those who didn’t, it’s not on me. It was never my intention to tarnish the image of Nigeria. It was me creating an awareness that we need help.”

Since the attack by soldiers on #EndSARS protesters at Lekki Tollgate, Lagos on October 20, 2020, during which some protesters were killed, the red-stained Nigerian flag has become a symbol to honour the brave youths that died.

It also reminds Nigerians of the fight against insecurity and human rights violations yet to be won.