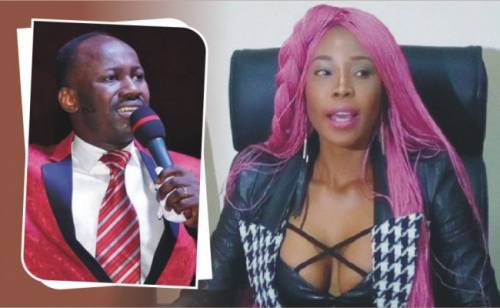 A lady identified as Stephanie Otobo has opened a can of worms exposing the general overseer of Omega Fire Ministries International, Apostle Johnson Suleman sharing screenshots of their video calls and the pastor’s Nude.

Recall that sometime in 2017/2018, the same Stephanie Otobo accused Apostle Johnson Suleman of a sex scandal that went viral on social media. But in a shocking turnaround, she appeared on the altar of Omega Fire Ministries in Auchi to confess to having been used by “powerful politicians and pastors to implicate Apostle Suleman.

In a recent tweet, the lady has alleged that Apostle Johnson Suleman Lured her to come make the false confession at his church in Auchi that she lied against him. Click the photos below to see the Nudes and see her tweets thereafter.

If these screenshots were fake, how did i get his pics that aren't public pics at the first place and how come I'm the first to release this kind of pics of him? He has changed his hairstyle twice since i came out to speak up with receipts. He has done alot to appear different🤣 pic.twitter.com/wsDOFKQDAX