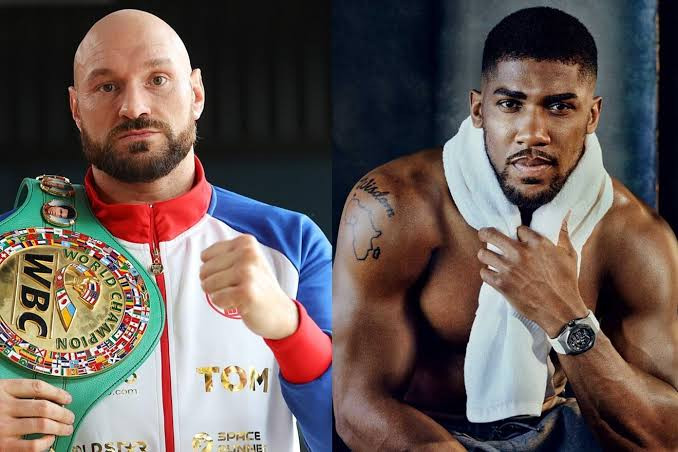 WBC heavyweight champion, Tyson Fury has claimed Anthony Joshua is yet to return his contract to finalise their Battle of Britain clash in Cardiff this December – slamming him as a ‘s**thouse bodybuilder’ and accusing him of not having the b****cks’ to face him.

Fury and Joshua looked set to finally clinch a deal to stage one of the most anticipated fights in boxing history after the Gypsy King offered the struggling fighter a shot at his WBC belt at the Millennium Stadium later this year.

Joshua immediately said he was interested and instructed his management group 258 and Matchroom to negotiate terms – with his promoter Eddie Hearn confirming they had accepted their offer for a 60-40 split.

In a rant on his Instagram on Twitter on Friday, September 23, Fury first took aim at Usyk for saying he was ‘scared of him’, before turning his attention to Joshua.

‘And of all the s***houses, that big bodybuilder Anthony Joshua – that’s a proper s***house that is. Haven’t signed the contract for I don’t knows how long and ain’t signing it. You little sausage.

‘You don’t want to fight, your manager’s a sausage I’ve never seen anything like you. However, I will be fighting on December 3rd if this sausage doesn’t sign the contract, and I don’t think he is [going to].

This week Warren confirmed Joshua’s camp had not yet returned their contract, but said he saw no reason why the fight would not be finalised.

‘No. It’s not signed yet,’ he said. ‘We’re waiting for them to come back to us. But I don’t see any reason why it shouldn’t be signed.

‘The big problem was when the fight would take place, it’s December.

‘To give everybody comfort we’ve even said that they can be involved in all the broadcast contracts, sponsorships and everything, so they can see that everything’s above board.

‘That side of it, we satisfied any worries they may have. There’s no worries about payment because they will get paid direct from the respective TV companies, so that side of it’s sorted out.’