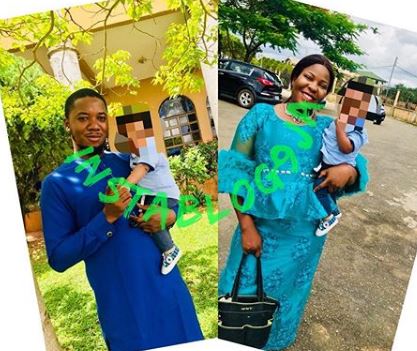 A woman has reportedly left her husband in a state of pain after allegedly stabbing her with a knife.

Ephraim Iyamah attacked by the wife

The police in Edo state are looking for a woman who allegedly stabbed her husband and sped off with their little baby.

The man identified as Ephraim Iyamah is now seeking for justice accusing his his wife of a year-and-a -few months, Jennifer of attacking and stabbing him over a quarrel.  The sad incident took place in Benin, Edo State.

According to the victim, he had questioned her about her movement and why she returned home late considering she’s a mother-of-one and she retaliated by allegedly engaging in a scuffle and stabbing him.

“It happened one month before our 1yr wedding anniversary . Her brother was around that night and I told her to behave like a mother because she came home very late in the night.This woman whom I once love stabbed me . I was rushed to the hospital and when I survived and returned home, she had left with my son, and took my ATM card and withdrew all the money in my account.

Up till now, I haven’t seen my son. I’m sharing my story because I want the world to know that men too suffer domestic violence,” he said.