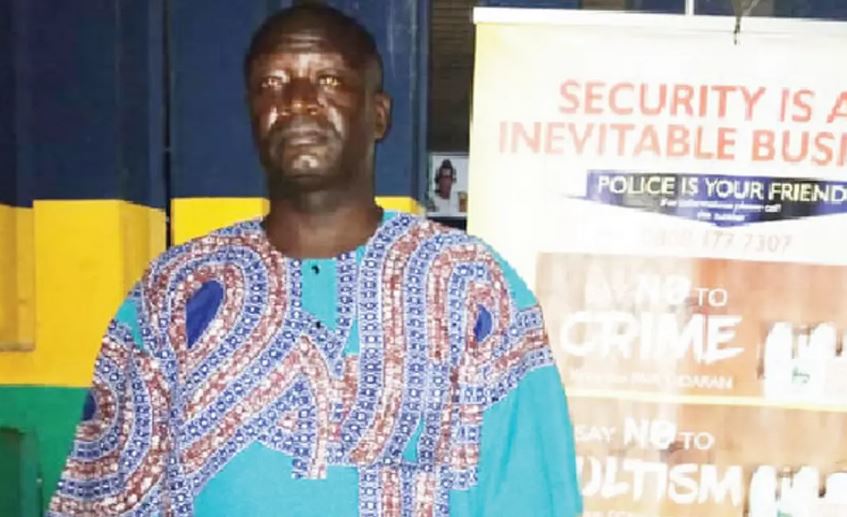 I Impregnated My Daughter Thrice, Presented Her For Abortion As Girlfriend – Ogun Evangelist Confesses

An Ogun evangelist arrested for incest has revealed how he allegedly engaged in incest with his daughter and repeatedly impregnated her.

Oluwafemi Oyebola, a 44-year-old senior evangelist of Christ Apostolic Church, Ogo-Oluwa Parish, Idi-Iroko, arrested by the Ogun State Police Command, tells DAUD OLATUNJI how he allegedly engaged in incest with his daughter and repeatedly impregnated her

Is it true that you slept with your daughter?

May God not allow you to experience a spell from the devil. My first wife’s name was Deborah. She had three children for me but died from a brief illness on October 7, 2016. She was buried at our apartment in the Ijoko area of Ogun State. Before her death, I was offered an opportunity to carry out evangelical work by a church. The offer I am talking about is one where someone gave me an opportunity to work at one of his churches as an evangelist. The church is located along Ajilete in Idi-Iroko. After I was given the evangelism job opportunity; I was also given an apartment to live in with members of my family during the work. Since I moved into the apartment the church offered me, I needed to rent out my own house at Ijoko. The money I got from the rent was used for my children’s school.

Exactly a year after the death of my wife, that is, November 2017, I summoned my three children to a family meeting and told them that I would love to marry another wife. They disagreed with me with the excuse that they could not live in the same house with another woman. Also, they pleaded that I should be calm until they finished their education, and in the end, we all agreed that I would not marry another wife. My daughter had just completed her Higher National Diploma programme. The second child was offered admission for a National Diploma programme, while the last child was in SS2.

Are you a trained pastor?

I am the senior evangelist at the church. I have not been promoted to the position of a pastor.

How old is your daughter whom you impregnated?

She is 24 years of age. The second child is 21 years old, while the last child will turn 18 on August 1. They are aware of this incident.

How did the incident occur?

The first sexual encounter occurred between December 2017 and January 2018. She reported to me that she had missed her period after having sex with her for the first time. That got me scared and I took her to the general hospital in Idi-Iroko for  an abortion. I paid N1,000. I presented her to the nurse as my girlfriend. In June 2018, the second sexual encounter happened and I took her to the same nurse for another abortion. At the time, the nurse confided in me that she was very fertile. I asked what I could do, and she gave me something (a contraceptive) for her but I didn’t know it was for family planning. A week after aborting the second pregnancy, she complained about a stomach ache.

What did you do?

I took her to a pharmacy in our community. The pharmacist administered drugs and injections to her, and she was relieved of the stomach ache. Two weeks after that day, she received her call-up letter for the National Youth Service Corps programme. She went for the service and returned home on December 29, 2018. She left again for Port Harcourt, Rivers State in January 2019. I used to tell her on the phone that I had someone I was dating and she never opposed me, but I promised her that I would marry the woman in the biblical way and the marriage would not affect any of my children. After she finished her NYSC programme, she returned home. But not long after her return, she pleaded with me that she would love to return to Port Harcourt to settle down and I refused, telling her she must stay with her younger ones. Whenever I heard cases of sexual intercourse between a father and his daughter, I always felt guilty and I promised myself that such would never happen between us again. That was why I insisted on marrying another wife. We have separate rooms. I have two daughters and one son. The two daughters share the same room, while the son sleeps in a separate room. It (having sex with her) was not intentional since she is not my wife. I used to feel reluctant while having sex with her but I didn’t know how she felt.

How was your sexual relationship with her exposed?

What actually exposed the secret was that I did not allow her to return to Port Harcourt. Around the end of March 2020, we had just finished a vigil when she came to meet me again that she would be going to Port Harcourt. I insisted that she would not go and she started shouting at me. I was upset and I slapped her, telling her that I am her father and the Bible does not preach that (disobedience). Few minutes after that incident, she came back to apologise and, immediately, I accepted the apology, not knowing that she had some other plans. She had earlier told me that she would embarrass and tarnish my image when I slapped her.

On April 1, she took her phone and some of her credentials and left; we did not know where she went. On April 14, she called me, saying I should not search for her and that she just wanted to settle down there and proceed with her career. She called me again the second day, telling me that she would make me regret that I beat her. I pleaded with her but she refused. I told all our family members to help plead with her on my behalf but she refused.

What exactly did she say that made you claim she willingly offered herself for your sexual desire?

Two weeks after the family meeting, I called her and asked whether she and her younger sister really meant what they told me about not wanting me to remarry. Her reply was yes. I asked her how I would manage my sexual urges but she kept quiet for a long time before she said she would bear the sexual responsibility. Immediately, I shushed her, but she insisted. I have not changed my statement since I was arrested in Owode. The deed has been done. It is better for me to say the truth so that God will save me and forgive me than to tell lies. On that day, she insisted that she would be bearing the sexual responsibility and that the secret would never leak. She was still studying for her HND at that time. I never knew that it was a spell and disgrace from the devil. It all happened between 2017 and 2018.

Osinbajo’s Daughter, Kiki Has Been My Tenant Since 2017 – Abuja Property Owner Speaks Up