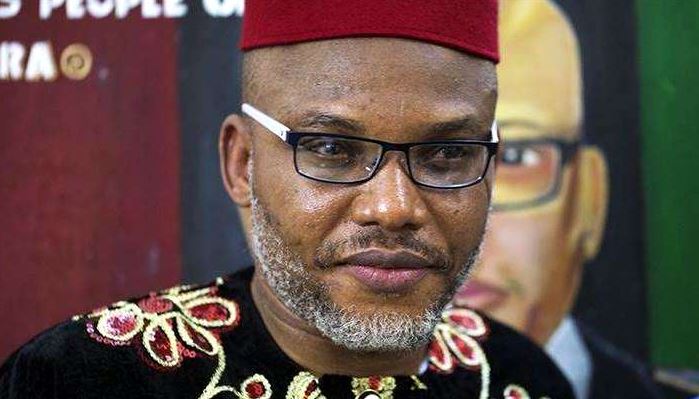 In an application filed on Wednesday, July 14, through his team of lawyers, the IPOB leader complained that he has been allegedly denied access to his doctors and has been subjected to mental torture.

Leader of the proscribed Indigenous People of Biafra (IPOB), Mazi Nnamdi Kanu, has stated that he has been subjected to psychological torture while urging the federal high court in Abuja to transfer him from the custody of the Department of State Services (DSS) to Kuje prison facility.

Kanu was arrested on June 25 and extradited to Nigeria to face trial for alleged treason.

After his arrest, Abubakar Malami, attorney-general of the federation (AGF), said the IPOB leader was “intercepted through the collaborative efforts of Nigerian intelligence and security services”.

Justice Binta Nyako, judge presiding over Kanu’s case, had ordered that he be remanded him in DSS’ custody, pending the continuation of his trial.

But in an application filed on Wednesday, July 14, through his team of lawyers led by Ifeanyi Ejiofor, the IPOB leader complained that he has been allegedly denied access to his doctors.

Kanu specifically applied for an order of the trial court, “directing the transfer of the Applicant from the custody of the National Headquarters of the State Security Service to the Nigerian Correctional Service Centre in Kuje, Abuja, within the jurisdiction of this Honourable Court, where he was initially detained before he was granted bail, pending the determination of the charge”.

As well as, “An order of this Honourable Court directing the Defendant/Applicant’s custodian, to grant access to his medical experts/doctors to carry out a comprehensive independent medical examination of the defendant/applicant’s health condition/status, while in custody.”

He alleged that he has been “subjected to mental and psychological torture” by the DSS, saying it would be in the interest of justice for the court to order his transfer to the Nigerian Correctional Service centre, which he described as “an impartial facility that has no interest whatsoever” in the outcome of his trial.

The affidavits attached to support his application stated “that an ECG examination was carried out on the defendant, and it was discovered that the defendant’s heart had been enlarged by more than 13%, posing a serious threat and danger to defendant’s life”.

“That the health personnel attending to the defendant in the custody of the State Security Service is not adequate, considering the circumstances of the defendant’s health condition,” the document reads.

“That if the health condition of the defendant is not addressed most promptly, the defendant may die in custody, even before his trial.”

Kanu also said in the legal documents that he has limited access to his lawyer, whom he said has to go through a “rigorous process” of seeking the approval of the DSS director, which may sometimes take days before it is granted.

The document added that Kanu can only be granted fair hearing in his trial, when he is “not remanded in the custody of his accusers”.