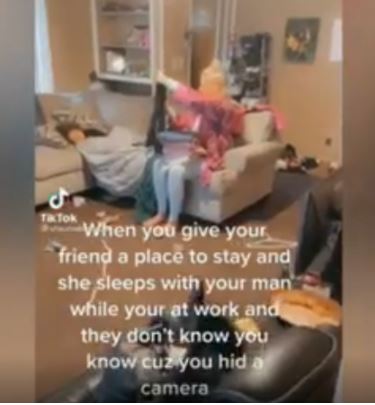 TikToker, Shaunabby uploaded a series of videos explaining the incident and revealing how it all unfolded and it has gone viral after being shared.

A really stunning video that has gone viral has shown the startling moment a lady confronted her friend after she caught her sleeping with her husband via a hidden camera.

TikToker, Shaunabby uploaded a series of videos explaining the incident and revealing how it all unfolded and it has gone viral after being shared.

In the first video which garnered more than 12 million views, she records her former friend sitting on a couch folding clothes.

The video captioned, “Ima confront both them when he walks through the door.” The text on the video read, “When you give your friend a place to stay and she sleeps with your man while you at work and they don’t know you know cuz you hid a camera.”

In another video titled, Part 2, the TikToker revealed that she placed a camera in her home because “her gut wasn’t feeling right.” She mentioned that it had nothing to do with her former friend; however, she speculated that her husband was cheating on her with another woman.

However to her surprise, she discovered it was actually her friend who was sleeping with her husband. The TikToker seemed to be surprised because she mentioned she and the woman have been friends for “like four years now.”

She was then seen in another video confronting her former friend. As her husband walked in and asked the TikToker “What is y’all talking about?” the woman’s former friend denied the accusation before the scene went dark and the audio is heard in the background for a brief second before the video ends. The video captioned, “BTW I made her think we were making a video at first FYI to all y’all trolls.”

In the last video titled part 3, the woman discussed the confrontation saying that the encounter eventually transitioned into a tussle. She added that her former friend and husband have left the home.