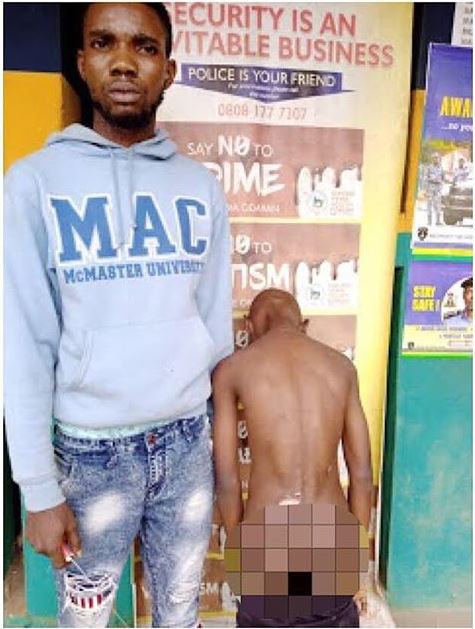 A man who used a hot knife to burn the buttocks of a 10-year-old boy has been apprehended in Ogun.

Badmus Folarin has been arrested over the sad incident

A 24-year-old man, Badmus Folarin, has been arrested by men of the Ogun State Police Command for allegedly using a hot knife to inflict second degree burn on the buttocks of a 10-year-old boy, Sunday David.

According to Command’s Spokesman, Abimbola Oyeyemi, “The suspect was arrested following a distress call received in Owode Egbado from a concerned neighbour.

He reported that they could hear a sorrowful cry of a boy. When the police got there, the boy was seen lying down helplessly with serious injuries all over his body.

On enquiry, it was discovered that the suspect put a knife on fire and when the knife was red hot, he applied it to the buttocks of the boy.During interrogation, the suspect alleged that the victim, who is living with the family, opened a tin of Milo belonging to the suspect’s mother and licked from it.”

Oyeyemi added that the victim was quickly rushed to OreOfe hospital by the police for medical attention while the suspect was also arrested and detained.