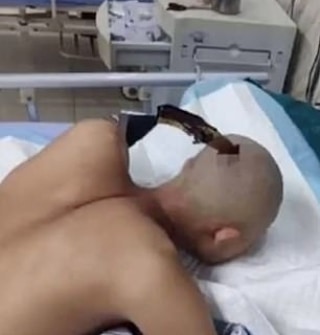 A Chinese man was rushed to the hospital following a stabbing on his head with a folding knife during a fight.

A video which emerged on the internet shows the unidentified man covered in blood and calmly walking to an ambulance while the knife is stuck in the back of his skull in south-western Chinese city Chongqing.

A medical worker is also seen holding a drip bag as she walked closely with the patient. The shocking incident allegedly occurred on Saturday in Chongqing’s Fuling district.

In another photo shared online, the man is pictured lying on a hospital bed after having his head shaved, and preparing to undergo a removal surgery.

According to Chinese media, the man is believed to have been recovering after undergoing an operation to remove the weapon. In a statement to China Youth News, Fuling authorities confirmed that the man was attacked during a brawl and that an investigation for the case is underway.

Watch the video below,

Oh No! See What 71-year-old Ghanaian Nanny Was Caught Doing to An Infant In US (Video)