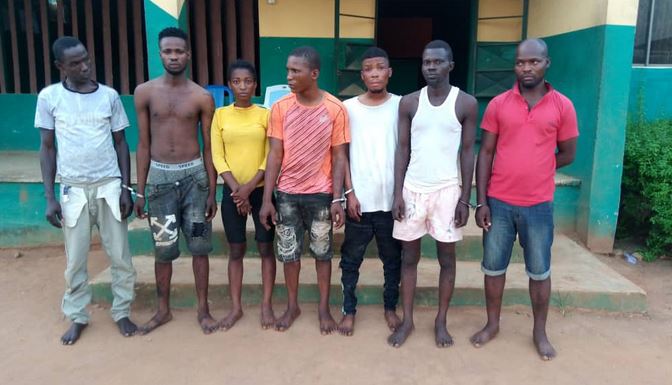 The suspects were arrested after they attacked members of the vigilante in their area, inflicting degrees of injury on them just to avenge the arrest of one of their members.

Adejobi gave the names of the suspected cultists as Abolaji Arbayo, Josiah Offem, Oluwapelumi Oyeyinka, Limidi Taofeeq, Ahmed Shittu who drives their operational vehicle, Zainab Nurudeen who serves as the armourer who sources for the guns to operate, and Rabiu Ganiyu.

He mentioned that the suspected cultists attacked members of the vigilante in their area, inflicting degrees of injury on them just to avenge the arrest of one of their members by the “Agbekoya” group.

Items recovered from them included machetes and some charms, one green paragon bus with Reg No LAGOS APP 600 XA that was used by the suspects for their operations.

Adejobi said the Commissioner of Police, Hakeem Odumusu, has immediately directed that the case be transferred to the State CID Panti for proper investigation.

Hunger Strike: Man Vows Not To Eat Until Nigeria Gets Better