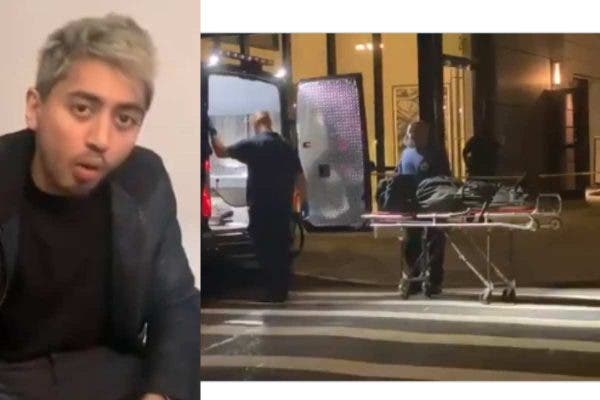 A video has shown the sad moment the body of Gokada CEO, who was murdered and decapitated was taken away.

The sad and tearful moment the body of murdered Gokada CEO, Fahim Saleh was removed from his New York apartment, has been caught on tape.

Recall that we reported that Fahim Saleh, the CEO of Gokada, was yesterday found dead and dismembered in his New York apartment, an electric saw lying next to the remains, police said.

Saleh’s body was found headless and dismembered inside his luxury Lower East Side apartment which he bought for $2.2 million in 2019.

According to Daily News, police made the grisly discovery in a building on E. Houston St. at Suffolk St. on the Lower East side about 3:30 p.m. Cops found contractor bags near the torso, sources said, but didn’t immediately open them to see if the body parts were inside. The body of the 33-year-old was discovered by his sister who became worried after not hearing from him in a day.

She visited and found him headless while his body had been cut up and sorted into different plastic bags. A power saw which was still plugged in was also found in the apartment.

A social media Joe Marino, who uses the handle @joemarino_ on Twitter, shared the video of the moment the body of Fahim Saleh was being removed from his apartment by NYC Medical Examiner. Sharing the video, Joe Marino wrote; “NYC Medical Exmainer removes the remains of CEO and venture capitalist Fahim Saleh. Saleh was found dismembered in his Lower East Side apartment Tuesday afternoon.”

If Will Smith Wants To Get Back At Jada, I’m Here – P*rn Star,Teanna Trump