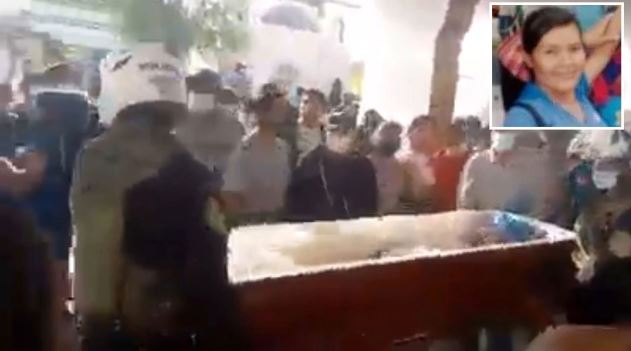 Rosa interrupted her funeral with stunned family members hearing a noise from her coffin at the service in the city of Lambayque in Peru last week.

A woman who was pronounced dead by medics following a fatal car crash left mourners in shock as she was banging on her coffin.

Rosa Isabel Cespedes Callaca interrupted her own funeral with stunned family members hearing a noise from her coffin at the service in the city of Lambayque in Peru last week.

She had been announced as a fatal casualty after being involved in a catastrophic crash which also took the life of her brother-in-law, reported the Daily Star.

Her three nephews were left with serious injuries following the incident which took place on the region’s Chiclayo-Picsi road.

Following the tragedy, Rosa was placed into a coffin ahead of her funeral last Tuesday, but mourners gasped when they heard noises at the start of the service.

Her relatives, who had lifted the coffin onto their shoulders, immediately lowered it and opened the lid to find her alive and peering at them.

Cemetery caretaker Juan Segundo Cajo commented: “[She] opened her eyes and was sweating. I immediately went to my office and called the police.”

Her family picked up the coffin and took it to the Referential Hospital Ferrenafe in Lambayeque, with Rosa still inside, reports the Metro.

Concerned medics put Rosa on life-support after they noticed she had weak signs of life but she sadly died a few hours later.

Her family are calling on healthcare bosses for answers to find out why she was declared dead “in the first place”.

Her aunt told local media: “We want to know why my niece reacted yesterday, when we were taking her to be buried.

“We have the videos in which she pushes and touches the coffin.”

Rosa’s relatives believe she may have been in a coma after the accident which could be the reason medics thought she was dead.

Police in Peru are now investigating the incident, which took place at the Lambayeque Regional Hospital where she first received treatment.