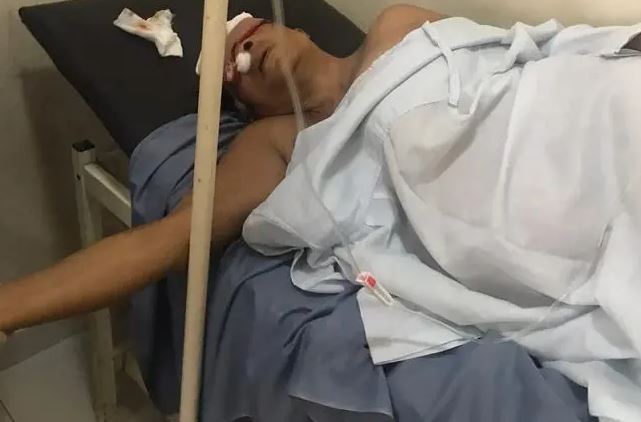 Shocker! Ex-KADPOLY Lecturer Kills Himself After Shooting His Wife In The Eyes (Photo)

An eye witness revealed that the deceased attacked his wife in the early hours of Thursday with the aim of taking her life.

The injured wife in hospital

Austin Umera, a former lecturer of the Department of Languages, Kaduna Polytechnic, has killed himself.

According to Tribune Online, the man shot his wife in the eyes before killing himself.

An eye witness told Tribune Online that the deceased attacked his wife in the early hours of Thursday with the aim of taking her life.

READ HERE;  2019: ''I am not sure there will be an election, even Nigeria may not live'' Pastor Adeboye says

“We heard gunshots from the house and we quickly called the emergency number. Immediately the policemen arrived at the residence at Kigo Road.

According to the source, the police took the injured wife to the hospital because she was shot in the eyes. While the dead body of her husband was lying on the ground.

As at the time of filing this report, the injured wife Dr Maurin Umerah who is a part-time lecturer at the Department of Languages, Kaduna State University is receiving treatment at 44 Army Reference Hospital Accident and Emergency Unit.

When contacted, the Police image-maker, ASP Mohammed Jalige, confirmed the incident. He said an investigation has since commenced.

Meanwhile, the corpse of the man has been deposited at Barau Dikko mortuary

Police Officials Return A Woman’s Purse Containing N115,000 After It Accidentally Fell Off A Bike In Lagos State