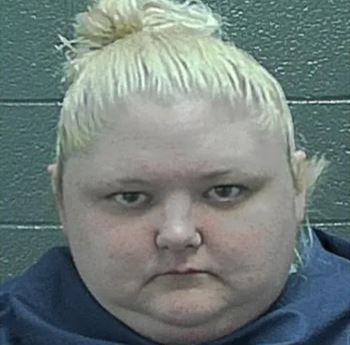 Rouleau, who has previous arrests for speeding and filing a false report, has been charged with aggravated s*xual assault.

The shocking story has been told of Brittany Rouleau, a woman who r*ped her own son in her bed.

According to Metro UK, the mother stripped n*ked, ordered her 12 year-old son to take off his clothes as he came out of the bathroom, then raped him in her bed, police say.

Her son says his mom then raped him, before telling him to ‘go clean himself up’ afterwards. Rouleau, 34, was arrested Saturday. After the alleged sex attack Rouleau’s son went to the couch to sleep, and told his mom what had happened ‘didn’t feel right,’ it is claimed.

Rouleau allegedly replied: ‘Well you can get in trouble because you accepted it…don’t tell anyone.’

The boy later told another adult who cares for him and they went together to the police.

He was subsequently interviewed at a child advocacy center and repeated the allegations against his mom.

Rouleau was arrested, and initially denied raping her son – only to later admit the sex crime, the Times Record News reported. The alleged pedophile is also said to have told a neighbor what she had done.

Rouleau, who has previous arrests for speeding and filing a false report, has been charged with aggravated sexual assault.

She remains in Wichita County Jail in lieu of $100,000 bond ahead of her next court hearing.