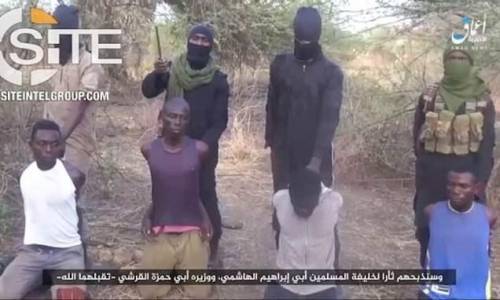 One of the masked militants who spoke in Hausa language during the execution said it was to avenge the killing of the group’s leaders in the Middle East earlier in 2022.

One of the world’s deadliest terror groups, the Islamic State of Iraq and Syria (ISIS) has published a video that shows the execution of about 20 Christian civilians in northeast Nigeria’s Borno State, BBC reports.

One of the masked militants who spoke in Hausa language during the execution said it was to avenge the killing of the group’s leaders in the Middle East earlier in 2022.

The video was published on an IS-linked news outlet and shows three groups of captives in civilian clothes.

The time of the video and location of execution is however unknown.

Nigerian authorities are also yet to speak on the video.

Its authenticity, was, however, confirmed by SITE Intelligence.

IS leader Abu Ibrahim al-Hashimi al-Qurashi died in February during a brazen nighttime airborne raid carried out by the United States special forces in northwestern Syria.

The operation, in which Kurdish forces also took part, was conducted in the Idlib region where his better-known predecessor Abu Bakr al-Baghdadi was killed in a similar raid in 2019.

Qurashi, who was also known as Amir Mohammed Said Abd al-Rahman al-Mawla, replaced Baghdadi after his death in a US raid in October 2019. He had a reputation for brutality.

The IS militants operate in the Lake Chad region under the name Islamic State West Africa Province (ISWAP), along with another Islamist militant group, Boko Haram. The group has recently suffered huge losses as a result of attacks by a multi-national military force.

Boko Haram jihadist group in June 2021 confirmed the death of its chief Abubakar Shekau, who sources say died during infighting with the rival Islamic State-allied faction, according to a video message from its presumed new commander.

Shekau’s death has since caused a huge division amongst the ranks of Boko Haram with some of its commanders pleading loyalty to ISWAP.

This caused a major shift in Nigeria’s conflict, though Islamic State in West Africa Province or ISWAP has recently emerged as the dominant force in the more than decade-long Islamist insurgency in the country’s northeast.