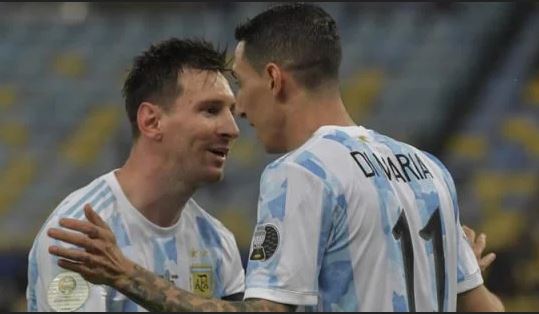 Argentina had last tasted success at a major tournament in 1993 when the great Gabriel Batistuta’s brace gave them a 2-1 win over Mexico in the Copa final in Ecuador.

Di Maria got the winner midway through the first half when he lobbed Ederson after full back Renan Lodi failed to cut out a long-through ball.

Superstar Lionel Messi won his first trophy with his national team as Angel Di Maria’s goal gave Argentina a 1-0 win over hosts Brazil in the Copa America final on Saturday.

Angel Di Maria was quoted by Goal as saying that “It’s going to be unforgettable as Messi told me thank you I said thanks to him.

“He told me that it was my final, that it was the rematch for the finals that I couldn’t play. It had to be today and today it was.”

“I am happy for my daughters, my wife, my parents, all the people who supported us and for all the crazy people who came here.

“A World Cup is coming up soon and this is a huge boost.”

“We fell short so many times, we dreamt so much about this, fought so hard,” said Di Maria, who was named man of the match.

“Many people said we wouldn’t manage it, we were criticized a lot. But we kept knocking at the door and kept going until today we knocked it down and entered.”

In a frantic start, Argentina’s burly enforcer Nicolas Otamendi was quickly in with his first foul while Brazilian midfielder Fred picked up the first booking after just three minutes for a studs up lunge at Gonzalo Montiel.